PHILADELPHIA – Truth Wins Out, which opposes right wing extremism, condemned Donald Trump for failing to clearly state that he opposes white supremacy. He also laid the groundwork for election disruptions, lied about voter fraud, and encouraged violence from The Proud Boys, an identified hate group.

“Donald Trump created a national security threat by giving the green light for right wing extremists to disrupt elections and potentially commit acts of terror to aid his reelection campaign,” said Truth Wins Out Executive Director Wayne Besen. “As an organization that monitors right wing extremism, we consider Trump’s debate performance a call to action for the Proud Boys and other hate groups. To do so, as President of the United States, is an unprecedented attack on law and order and an existential threat to our democracy. Are we a nation of laws or a nation of thugs?”

According to The New York Times:

“Are you willing, tonight, to condemn white supremacists and militia groups and to say that they need to stand down and not add to the violence in a number of these cities as we saw in Kenosha and as we’ve seen in Portland?” Chris Wallace, the moderator, asked the president.

“Sure. I’m willing to do that,” said Mr. Trump, but quickly added, “Almost everything I see is from the left wing. Not from the right wing.”

When Mr. Wallace pressed on, the president asked, “What do you want to call them?” 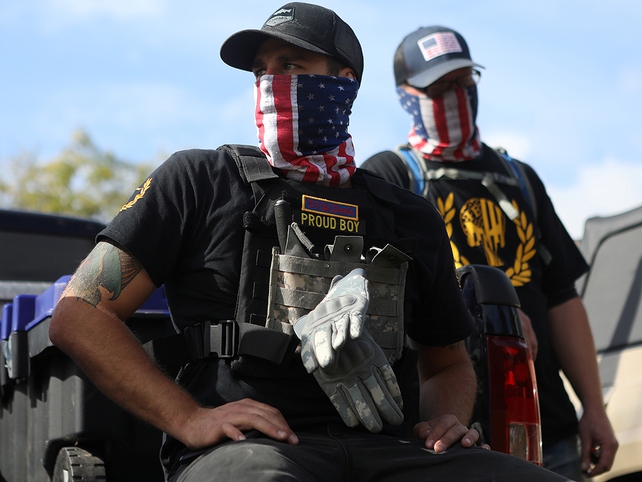 According to the Center for Strategic and International Studies, right-wing extremists were behind two-thirds of terrorist attacks and plots in the United States last year, and over 90 percent of such attacks between Jan. 1 and May 8 this year.

“The idea of heavily armed right wing extremists roaming our city streets looking for trouble is a huge threat to LGBTQ Americans. Many of these mercenaries are not going to be our friends,” said Truth Wins Out’s Wayne Besen. “It’s appalling that we have to worry about the potential of this occurring because the President fears he will lose reelection if the people get to vote. News of his enormous debt and the potentiality of Trump facing criminal charges only increases our worry, as Trump behaved like a cornered rat on the debate stage, who was willing to burn down the country to stay in power.”