Images From A Sideshow Running Away With The Circus…(continued)

Here’s some shots of the counter-demonstrators… 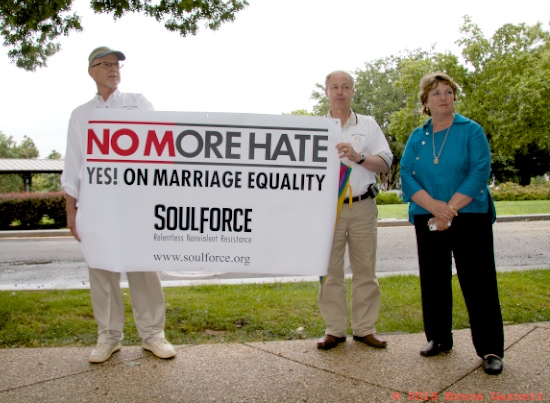 As I said previously, the main contingent of the counter-demonstrators came in two waves shortly after the NOM rally began. But even as NOM was setting up there were a handful of individuals there on the sidewalk near them, quietly speaking their truths. And among these was Mel White and his companions from Soulforce. I saw Mel occasionally walk over to some of the NOM folks and chat with them for a while. What was said between them I have no idea: much as I would have like to have snapped some photos of those conversations, I kept my distance. At 56 going on 57, I have a very negative opinion of the possibility of changing minds, let alone hearts of any of these True Believers. But I deeply respect anyone who still believes in their heart that it can be done. So I stay out of it. This is why I am not a professional news photographer. The spirit of Weegee laughs at my deference to the better angels. 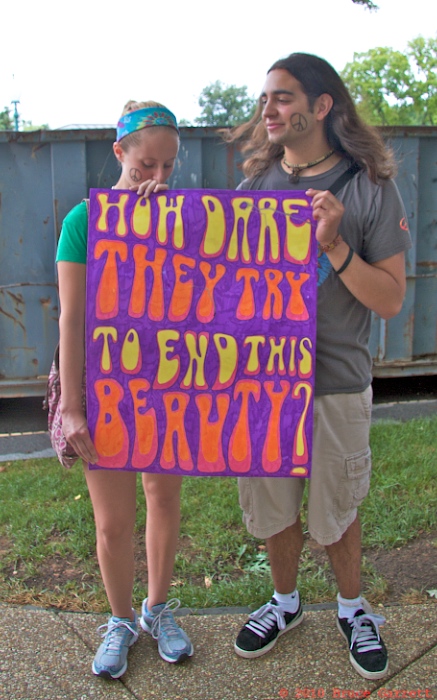 More and more I am seeing at these demonstrations, young heterosexual couples who see this struggle as their own too. And it is. Only on its face is this a fight about homosexuality. Look closer. It’s a fight over the right to love and be loved, waged by the power hungry war mongering human gutter, that throughout history has viewed the power of love as the essential enemy to be smashed wherever it exists. The gay rights struggle is the lover’s struggle. 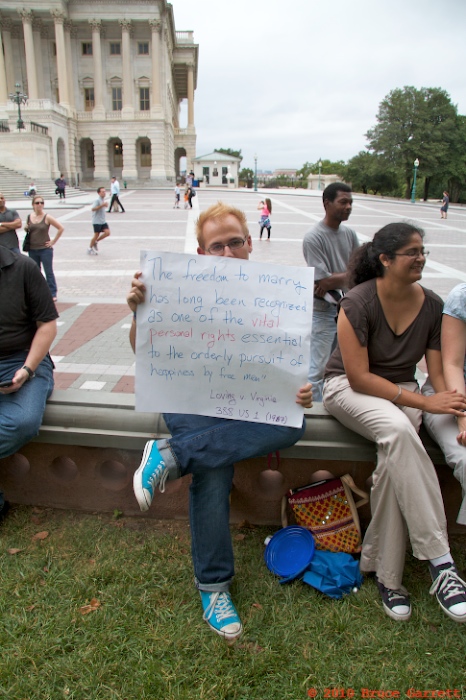 There were also lots of individual folks bearing simple statements in support of the right to love. Sometimes you thought you saw another lonely heart, determined to stand up for what in their own lives is yet to be… 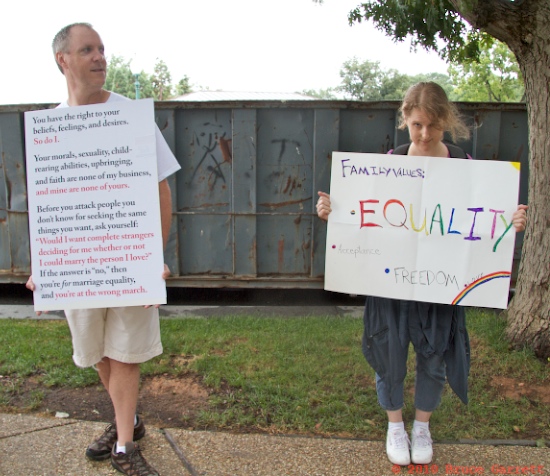 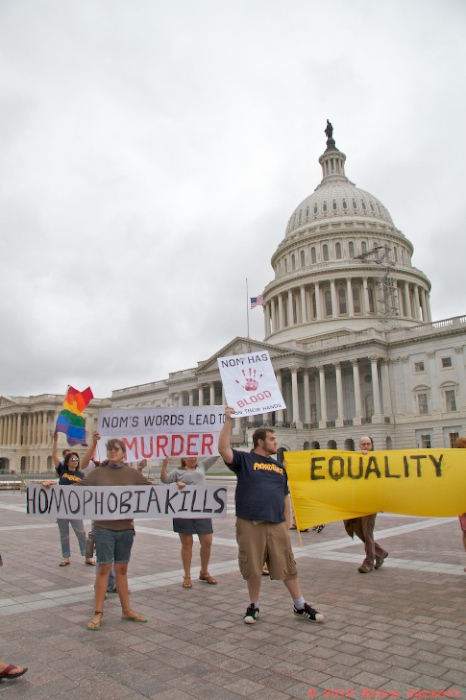 As I said, the main force of counter-demonstrators came in two waves. The first was peaceful and positive. The second wave were a tad angrier. And…louder. They were quickly asked/ordered to move further down the plaza, away from the NOM event. 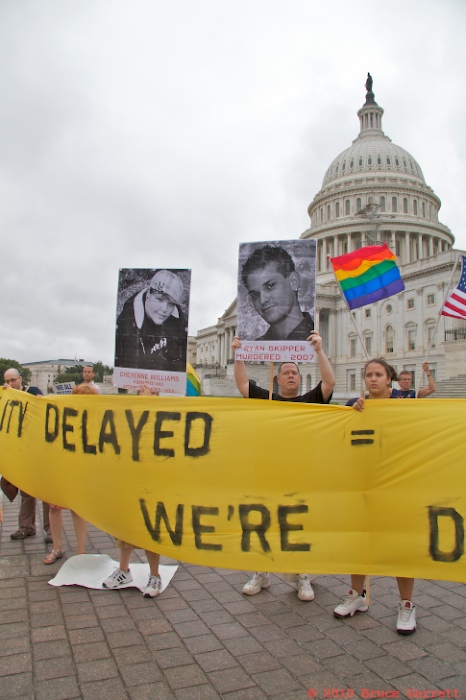 I understand this anger perfectly well. And I am not going to sit here and pontificate that this sort of demonstration is counter-productive. The other side turns us into scarecrows they can safely fear at a distance, and defeat with bar stool valor and junk food religion. They need to see that we are as human as they; and there is nothing less surprising on this earth then the sight of humans who have been attacked getting angry, and fighting back. When people are denied the dream of love, when that ability to love another, and accept their love in return is gutted out of them, what is left?

I have have said often, that the one who fights this fight and doesn’t put their head down on the pillow every night, just a little bit angrier then the night before, just a little more angry then they thought it was humanly possible to be angry, isn’t really paying attention. But it is oh-so easy for anger to become hate. And hate will kill your soul.

This is the lover’s struggle. When all you have left in it is anger, you are done for. It is for love that we fight. Every moment you can put anger aside and remember that, you defeat hate. 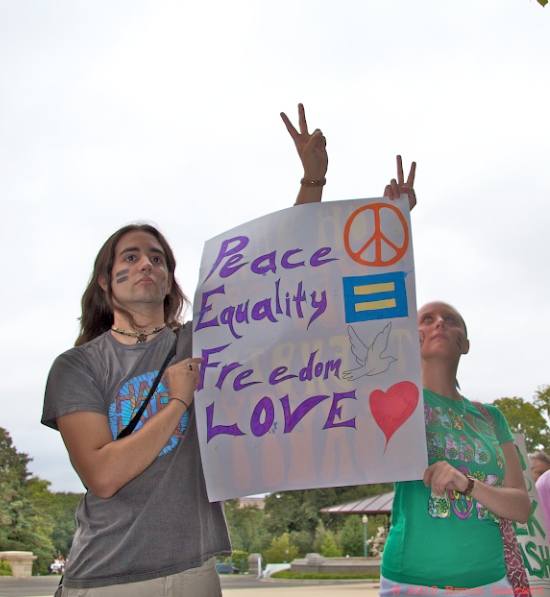 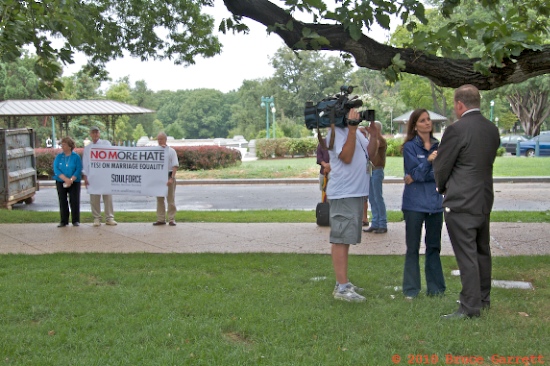 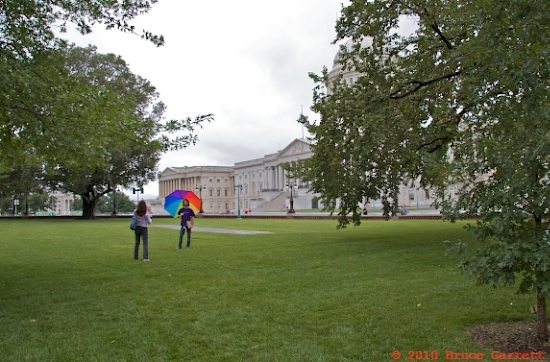