Maggie Gallagher feels that her jihad against same-sex couples is being unfairly linked to the bullying that lead at the beginning of the new school year to a rash of gay teen suicides.   So she begins a post over at Town Hall last week with the following question.

Do I have blood on my hands?

Imagine it being said in a voice of innocent wide-eyed befuddlement.  Then read on as she – yet again – insists that gay people are innately promiscuous, sexually violent and drug addicted.   She also expresses a charming befuddlement as to why gay teens seem more likely to either get pregnant or get someone else pregnant…as if all the negative messages kids hear from her and her kind, that being gay is a horrible tragic perversion of natural sexuality that leads to all kinds of self destructive behaviors, that it is a choice, that if they just act like good heterosexuals they won’t be gay anymore, couldn’t possibly be driving kids into the sort of risky behavior that gets themselves or other kids pregnant, let alone gives bullies permission to torment them to death.

Blood on your hands Maggie?  Oh goodness no… 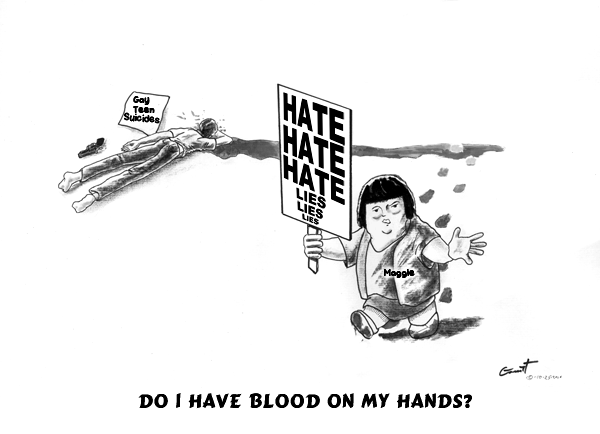