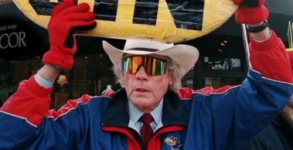 Rachel Maddow: Westboro Baptist Brought Out The Best In The American People 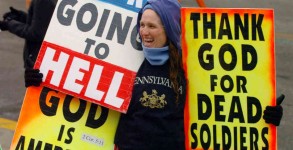 Westboro Baptist Would Like Attention At Graceland In Memphis

Please give us attention! Please! Please

Aussie Salvation Army major Andrew Craibe, who caused an uproar this summer when he said that gay people should be put to death, has found

Obnoxious for those who loved her, but I think the Phelps clan shtick is getting kind of old: [h/t Joe

Lest you think they’re doing this for moral reasons, stop right there: An anti-gay church group says it will not picket the funeral of the

Disgusting. The Westboro folks are a sideshow, of course, but… Kansas-based Westboro Baptist Church will be dispatching members of its congregation to protest the funeral

Shirley Phelps-Roper Will Burn Koran AND American Flag, So There!

David Pakman interviewed Shirley Phelps-Roper for Midweek Politics about the whole Terry Jones thing, and she is very upset that Westboro is completely being upstaged

Why won’t anybody pay attention to the poor, put-upon Phelps family?  I mean, they’re only really in it for the celebrity anyway: One of those

Yesterday I noted that the Westboro Baptist clan was on its way to protest a little bit of everything in St. Louis, including the Lady