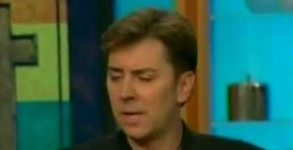 Bennett no longer living the "nightmare" of "playing house" with dudes

Purported “ex-gay” Stephen Bennett went on Joy Behar’s show with his wife Irene to talk about being “ex-gay.” Wouldn’t you know it? He rattled off

It really is the beginning of the end for the phonies at Exodus International and NARTH. It seems reasonable and intelligent Christians are starting to

While 2009 will be remembered for the worldwide economic recession, for the ex-gay industry, it will be known as The Great Moral Depression. It was

Outspoken activist Stephen Bennett has officially failed as an “ex-gay” spokesman and has finally found a real job. I can only guess that the foundering

Send them to Mexico. Commenting on federal legislation that would allow foreign individuals to join their gay American partners on U.S. soil, Family Research Council

Stephen Bennett is a Connecticut-based ex-gay activist who counsels no ex-gays and offers no evidence of a past gay life, but who nevertheless requires $180,000