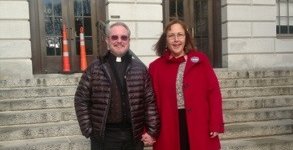 On January 17th, over 50 people participated in the Massachusetts Transgender Political Coalition (MTPC) and the Transgender Equal Rights Coalition's Community Action Day at the

But I’m posting it anyway, because, well: Something new and different for us: people who claim to be “pro-family” conservative Christians, only working to preserve

Wingnuts Actually Think This Is What Liberals Want

This video is why our country will never move forward as long as we pretend that there are two sides to every issue, that both

Did Rick Perry Ruin The Gay-Baiting Fun For Everybody Else?

Joshua Green at the Boston Globe argues that he did, with his silly Brokeback Mountain jacket-wearing “I am victim, hear me roar!” ad, which garnered

A mayoral election in the Republican stranglehold stronghold of San Diego is underway, and two of the Republican candidates for mayor are also openly gay.

As mistermix at Balloon Juice points out, the entire Dan Savage Salon interview is worth reading, but I would encourage readers to absorb his words

Annise Parker was elected mayor of Houston in 2009, and it made news across the country because she was the first LGBT person to hold

Afternoon Dumping of the Links

Let me experiment with a new feature, since I often, at the end of the day, have approximately 50,000 tabs open, all of which are

Pelosi’s Message for GOP: You Will Roll Back NOTHING

Nancy Pelosi is running for House Minority Leader, and she’s sent a letter to her colleagues that, as Greg Sargent points out, can basically be