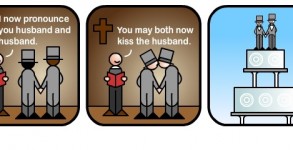 I imagine the spin rooms/closets over at the Log Cabin Republicans and GOProud went a little nuts over the last few hours, in the wake

Obama’s interview with Robin Roberts is airing in just a few minutes. Heads up! [h/t Joe

What’s he caterwauling about today? This: The president of a group dedicated to exposing the homosexual activist agenda thinks President Obama should be impeached for ignoring

Newt: Even if I Lose Deep South, You Are Stuck With Me

The Huffington Post reports that Newt Gingrich ended an appearance Monday night at a presidential forum in Birmingham, Ala., with a cry of defiance, vowing

GOP Presidential Race Devolving Into a Joke — But a Scary One

In a pointed exchange during last night’s GOP presidential debate, Mitt Romney slammed Rick Santorum on what we thought was last election cycle’s issue of

Franklin Graham’s Attack on Obama is a Disgrace to Christianity

It is absolutely sickening how Rev. Graham and Rick Santorum are so divisive that they are questioning President Barack Obama’s religion. Interestingly, Graham thinks that

Dear Pat: We know you are teetering on the brink of total irrelevancy and that your mind doesn’t seem to be what it once was