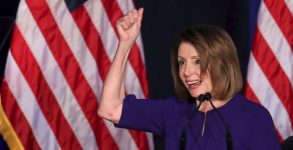 This isn’t amateur hour on Capitol Hill. These precarious times demand a seasoned leader who knows how to fight for LGBT equality and stand for

Pelosi’s Message for GOP: You Will Roll Back NOTHING

Nancy Pelosi is running for House Minority Leader, and she’s sent a letter to her colleagues that, as Greg Sargent points out, can basically be

So there’s a post over at Americans for Truth right now about how 1. Peter isn’t going to miss Nancy Pelosi. 2. San Francisco is

Get Equal Got It Right With Sen. Harry Reid ENDA Protest

(Weekly Column) Also On The Huffington Post Last week, I attended the Net Roots conference in Las Vegas. This is a yearly event where bloggers

The Circumstances Under Which Mike Huckabee Would Go Gay [Wingnut Jokes]

If his only lady-choices were Nancy Pelosi and Helen Thomas, Mike Huckabee would be “for same-sex marriage,” presumably his own. Seriously, that’s what he said.

Yesterday was a big day for the intersection between politics and gayness! In this report, Rachel covers it all, from crazy John Sheehan just cold