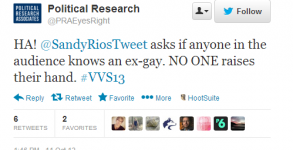 Nobody has ever met an "ex-gay" because they are "maligned and threatened," says Sandy

Joe reports that wingnuts are so mad they’re putting down their trans fats so that they can gesture with their hands, over the fact that

Then The Onion has a horoscope just for you! [h/t Joe

These Are The Most Intellectual Arguments Against Marriage Equality

The reason the Religious Right loses in court is simply that their arguments are basically the arguments in this video, just dressed up in a

This explains everything. Wingnuts are simply reading a different text from the rest of the population: I can totally see Tony Perkins, Linda Harvey and

Here is another video that will make you laugh, will horrify you, or possibly both. This guy, this pastor Charles L. Worley of the Providence

Did Peter LaBarbera Dress Up In Drag And Go To Nebraska?

This video, of a woman testifying against, um, p-e-n-i-s-e-s and gays and declaring that gays molest schoolchildren because the kids don’t have AIDS yet, and

Speaking of the history of marriage, Jon Stewart had some fun with Republicans and Fox News hosts and their reactions to Obama’s announcement of support

Remember a few weeks ago when I made fun of Pastor Ken Hutcherson for trying to “reclaim” the rainbow? Now he wants to reclaim the

Our friends at Christwire have come up with several wedding announcements for gay couples, if they were written by the Religious Right. Here’s my favorite