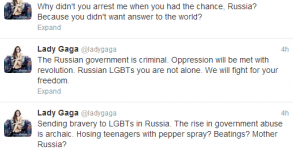 Lady Gaga’s Message To Russia: ‘Why Didn’t You Arrest Me When You Had The Chance?’

The pop star has some choice words for the Putin regime

Lookie there, you all get two Random Ten’s this week, because I didn’t have time on Friday afternoon. So it’s technically the end of the

This came across the wires yesterday, but I didn’t get to it. Lady Gaga and her mother, Cynthia Germanotta, have just launched the Born This

This screed from supposed “ex-gay” and anti-gay crusader D.L. Foster, about the suicide of Jamey Rodemeyer, has to be seen to be believed. It’s been

If you’ll remember, fourteen year-old Jamey Rodemeyer took his own life last week after years of anti-gay bullying. He was also a huge Lady Gaga

What is it this year with anti-gay GOP presidential hopefuls openly declaring their love for very, very gay things?  First it was Michele Bachmann queening

Shorter Bill Donohue: “Lady Gaga ‘Judas’ Video Is A Mess” Didn’t Madonna do something like this way better more offensively in

Didn’t I just write this same piece about a lesser wingnut? So, Jim Daly of Focus on the Family doesn’t like that Lady Gaga song

Well, this is a tragedy: In a recently released song titled “Born This Way,” pop singer Stefani Joanne Angelina Germanotta, better known to her fawning