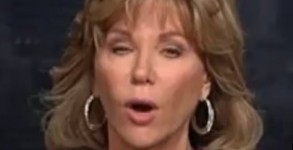 Sandy Rios Not Sure If Ending Apartheid Was A ‘Righteous Cause’

Joseph Farah of WorldNutDaily has, predictably, stated that yesterday’s DC earthquake, which was obviously just devastating, was God’s judgment on ‘Murka for her terrible, terrible

Joseph Farah: Penis Must Conquer Vagina for Marriage to be Real!

Joseph Farah is at it again, arguing that marriage is not marriage unless a penis has conquered a vagina, because of that time-honored passage in

Chris Barron of GOProud has a guest post up at Pam’s House Blend where he explains why he agreed to debate Joseph Farah of WingNutDaily.

Here’s Ed Brayton’s “Dumbass Quote of the Day,” which comes from WingNutDaily’s Joseph Farah: Legally speaking, though, even in an increasingly secular society like ours,

Terry Krepel of Media Matters has a good article at the Huffington Post. It shows that while World Net Daily’s founder Joseph Farah was in

Week three of wingnuts sparring with each other over the Homo[sexual]Con[wingnuts] crowd and the Ann Coulter speaking-to of that crowd. Here’s Ann Coulter on that

Peter LaBarbera Would Like Ann Coulter To Donate Her Homocon Speaking Fee To Bigots, Please

So, I think this is slapfight, part twenty or so.  Let’s catch up real quick: 1.  Gay Republican group GOProud announces that they have hired