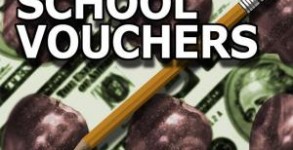 Wingnut Pastor Rails Against Homosexual Agenda On “Most Sitcoms”

Last week I posted a rambling, eleven minute invocation on the floor of the Georgia House of Representatives from an anti-gay wingnut pastor named Tony

Here’s a straight kid in Georgia who gets it, and on the other side, here are the public school faculty who are apparently letting their

A Rambling, Anti-Gay, Million Year-Long Invocation for the Georgia House of Representatives

Here is Tony Byrd, an extremist pastor, giving the invocation in the Georgia House of Representatives! Here is Rebecca from Wonkette, describing the following video:

The headline sounds bad enough, but let’s dive in deeper to see just how disgusting this comment really is. It comes from Georgia state representative

If you’ve been following The Gay News for a while, you probably remember the story of Jennifer Keeton. She was a counseling student at Augusta

I know that, in Fundamentalist Christian Land, they want to keep their heads in the sand and pretend that there are no gay people among

Peter has shared some words about Jim Swilley, the Georgia megachurch pastor who has shown himself to be a man of integrity and honesty, by

This took a lot of guts: The pastor of a megachurch in Conyers, Ga., told his congregation last week that he’s gay, saying that while