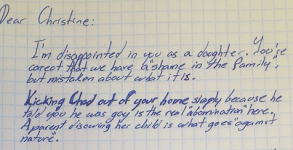 A Grandfather’s Letter, Standing Up For His Gay Grandson

Another Day, Another Anti-Gay Republican Caught in a Gay Sex Scandal

This time, it’s in Indiana. Meet state representative Phillip Hinkle, who voted with his anti-gay compatriots to ban marriage equality in that state. Here’s what

Newt Gingrich Cheated On Various Sick Wives Due To Patriotism

None of you love your country enough to deliver divorce papers to your cancer-ridden wife in the hospital, so that you can marry the new

One Version of ‘Christian Education’

Here’s a school in Texas where you can get all your kids’ Christian education needs met for free if you, like, have sex with the