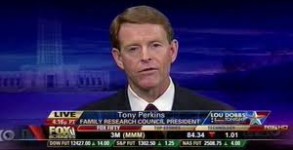 One Year Ago Today…

Today's anniversary of the repeal of "Don't Ask, Don't Tell" is definitely a milestone worth celebrating. But don't think, even for a minute, that there

File this one under “Duh” — In the fierce debate that led up to President Barack Obama’s repeal last September of Don’t Ask Don’t Tell,

Talk about trying to put the genie back into the bottle: in an exclusive interview with ThinkProgress’s Scott Keyes, notoriously bigoted Iowa GOP Rep. Steve

Elaine Donnelly, whose “job” I assumed would have disappeared by now — all she ever really did was fight against gays serving in the military,

Brown University’s president has proposed that it continue to ban military recruiters from campus until the military welcomes trans recruits. It risks losing vast amounts

A Law School With Integrity

[Note from Evan:  This is Jenny Blair, and she’s going to be pitching in a bit with the writing around here.  Welcome her!] One of

More good news.  Though Don’t Ask, Don’t Tell has technically been repealed, as we all know, there has been an injunction in place essentially preserving