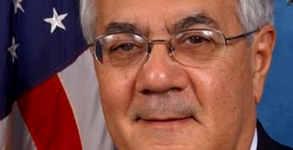 Barney Speaks to LGBT Caucus In Charlotte: ‘We Are On The Verge Of Winning’

Democrats Vote Unanimously To Include Marriage Equality In Party Platform

Progress! The Democratic Party platform drafting committee approved on Sunday language endorsing same-sex marriage in addition to other pro-LGBT positions as part of the Democratic

Did you know that, in paranoid conspiracy theory Teabagger Land, there is someone who thinks that gays don’t really want equality and the full exercise

So, this is mature: Excuse me, it’s the “cast” against gay marriage. Maybe he’s talking about something else entirely. For the record, when Mary Cheney

Bryan Fischer Says All The AIDS Came From Barney Frank

Bryan Fischer is so stupid that he thinks that guys had unprotected sex and contracted HIV/AIDS because Barney Frank “modeled a lifestyle” for people. Yes,