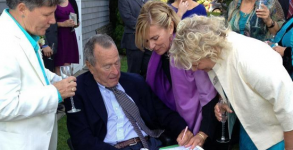 George And Barbara Bush Under Fire For Witnessing Gay Wedding

(Weekly Column) A new poll by the Pew Forum on Religion and Public Life reveals that a record number of Americans (19.3%) have abandoned faith

The ‘Choice’ Issue On Homosexuality Matters

Truth Wins Out is unique among LGBT non-profit organizations because we allow for dissenting views among our writers — at least in our blog section.

I’m catching up on my blog reading, and if you don’t read Roy Edroso’s weekly round-up of the idiocy of the Right Wing blogosphere, you

Southern Baptist Leader Admits to Lying About ‘Nature of Homosexuality’

We called for an apology and….. “We’ve (Southern Baptists) lied about the nature of homosexuality and have practiced what can only be described as homophobia.

The other day, Albert Mohler, president of the Southern Baptist Theological Seminary, wrote a grotesque piece about the spate of gay teen suicides we’ve been

If you’ve been reading me for any period of time, you know that one of my favorite games is to point out the OTHER things

Al Mohler and Matt Barber Having a ‘Hate-Off’ Re: Bullying and Suicide

Which bigoted hater will hate the hatiest?  Let’s find out! Many of you have already read the column from Albert Mohler, president of the Southern

One byproduct of natural disasters like the Haitian earthquake is that they tend to expose the utter insanity of some Religious Right leaders. While some,