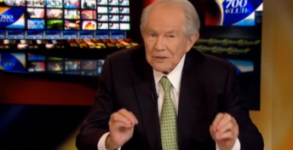 Also, sometimes stuff in your house is possessed by demons, which is unfortunate

Pat Robertson Is The New Slayer

Move over, Buffy. He’s got the demons and the vampires taken care of. Also, the feng shui and the kids who take karate lessons, by which

Here’s a new argument. Sometimes when you write about gay issues every day, especially as they relate to Religious Right bigotry, you experience quite a

Uh. Thanks, Right Wing Watch, for looking at the 700 Club television program so we don’t have to

Earth to Pat:  the majority of Americans are against DOMA.  Stop listening to the “Americans” in your head. Anyway, this video is funny. [h/t Joe

This is the funniest, campiest 700 Club clip I’ve ever seen. The melancholy music. The close-up shots of the little boy wearing high heel shoes.

The more I read about the Tea Party, the more it becomes vividly clear that this is nothing more than a Great Tea Purge of