PHILADELPHIA – Truth Wins Out assailed the House Republican Study Committee today after Vice News revealed that the group, representing 70-percent of GOP House members, hatched a plan to pressure Amazon into reinstating books from a discredited conversion therapist, the late Dr. Joseph Nicolosi, whose work demeans and dehumanizes LGBT people. Nicolosi was the founder of the notorious National Association for Research and Therapy of Homosexuality (NARTH), which displayed great disdain for LGBT people, once referring to LGBT people as a “purple menace.” The plan to harass Amazon is ironic, considering it follows a landmark video apology last month by several high-profile former “ex-gay” conversion leaders who now call for a federal ban on the destructive practice.

“It is reprehensible that the GOP is now pressuring Amazon to reinstate discredited books that abuse and dehumanize LGBT people,” said Truth Wins Out’s Executive Director Wayne Besen. “Conversion therapy is a waste of time and money, which divides families and destroys lives. Amazon was correct to stop peddling a fraudulent product that causes real harm and heartache. There are simply no happy endings with conversion therapy.”

In December, after a campaign by Truth Wins Out, Amazon removed an “ex-gay” conversion app by Living Hope Ministries. Apple, Microsoft, and Google also stopped offering the abusive app. In the past month, a successful Change.org petition by activist Sky Gray, signed by more than 80,000 people, led to Nicolosi’s books being taken off the shelf.

Nicolosi was controversial, recommending in his books that his group, NARTH, should be “treating” males as young as three years old, referring to them as “pre-homosexual boys.” In 2008, Dr. Lisa Diamond of University of Utah publicly rebuked Nicolosi in a Truth Wins Out YouTube video. Diamond claimed that Dr. Nicolosi deliberately twisted her work for political gain.

Dr. Nicolosi was subjected to much ridicule for encouraging his male clients to 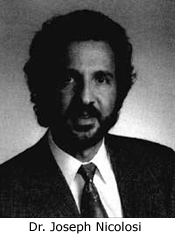 become more masculine by drinking Gatorade and referring to friends as “dude”. NARTH therapists have been known to practice rubber band therapy, where a gay client is made to wear a rubber band and snap it on his wrist when sexually stimulated. It is a mild form of aversion therapy meant to “snap” the client out of the moment of attraction. NARTH members have also been known to practice “touch therapy”, where a client sits in the therapist’s lap for up to an hour, while the therapist caresses him. Such strange and creepy techniques have led to sexual abuse on many occasions.

“It is clear that many of these Republican’s have no idea what they are endorsing,” said TWO’s Besen. “If they want to back this garbage, bring it on. We will thoroughly embarrass them by tying them to the bizarre techniques, abusive tactics, and racist and sexist methods used by Nicolosi and NARTH. Then again, given the current trajectory of the GOP, they might celebrate the racism, sexism and homophobia.”

In 2006, Gerald Schoenwolf, PhD, also a member of NARTH’s “Scientific Advisory Committee,” wrote a polemic on the group’s website that seemed to justify slavery: “With all due respect, there is another way, or other ways, to look at the race issue in America,” wrote Schoenwolf. “It could be pointed out, for example, that Africa at the time of slavery was still primarily a jungle, as yet uncivilized or industrialized. Life there was savage, as savage as the jungle for most people, and that it was the Africans themselves who first enslaved their own people. They sold their own people to other countries, and those brought to Europe, South America, America, and other countries, were in many ways better off than they had been in Africa. But if one even begins to say these things one is quickly shouted down as though one were a complete madman.”

Reparative (aka conversion) therapy is not considered a legitimate and accepted form of psychological care. It is soundly rejected by every mainstream medical and mental health organization in America. The American Psychological Association says attempts to change sexual orientation can cause, “anxiety, depression and self destructive behavior” including suicide.