Jewish Press must FIRE editor for Racist and Homophobic Tweets 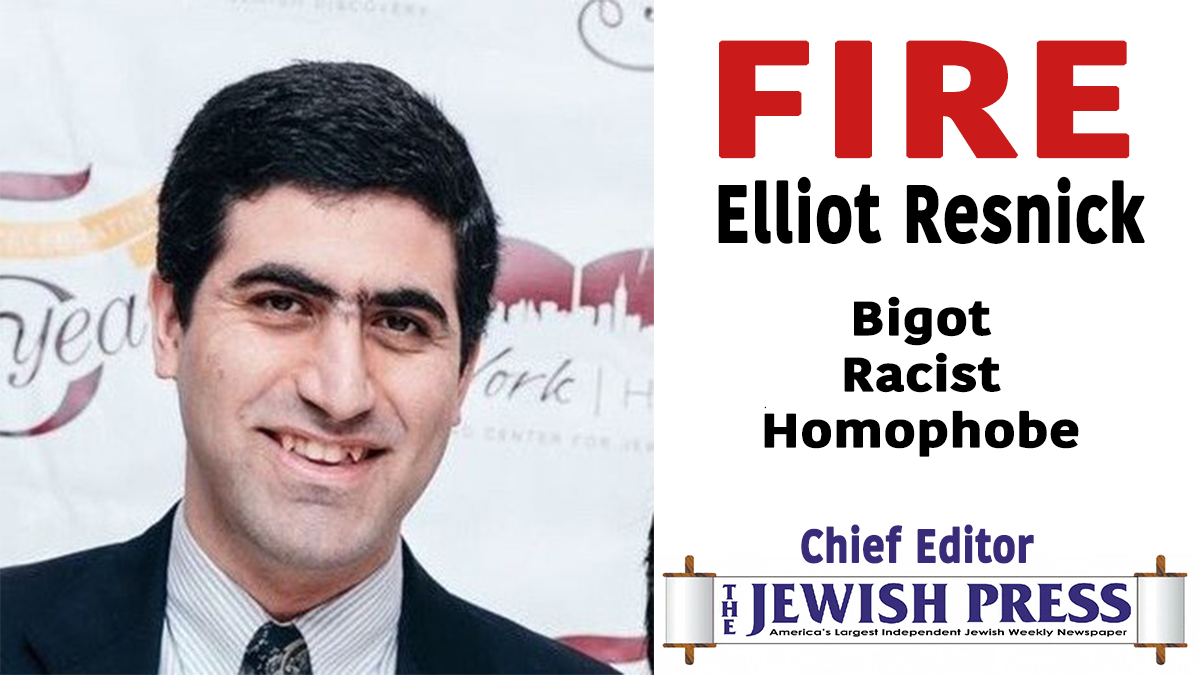 If there is one group who knows the sting and tragedy of bigotry and discrimination it is the Jewish People. That is why it is highly disturbing that Elliot Resnick, Chief Editor of The Jewish Press, has repeatedly engaged in bigoted racist, sexist, and homophobic Twitter rants. He also seems to think it’s fine for grown men to seduce our 17-year old daughters. It’s difficult to tell if he works for a Jewish publication or an Alt-Right hate group.

Here are a few of Resnick’s choice Tweets:

1) Racist 1: “If blacks resent America’s (SIC) so much, let them discard Christianity (which the ‘white man’ gave them) and re-embrace the primitive religions they practiced in Africa.

2) Racist 2: “If only liberals had a quarter of the decency and civility of Robert E. Lee, this world would be a far better place.”

4) Homophobia 2: “The path of my Uber ride is marked in rainbow colors. The homosexual agenda apparently can never be sufficiently shoved down our throats.”

5) Anti-Islam: “Defeating ISIS is impossible. In one form or another, ISIS will exist as long as Islam does.”

6) Sexual Abuse of Minors: “How is it assault to commit a consensual immoral act with a 17-year old? The notion that a 17-year old in this century is an innocent child is laughable.”

7) Race & Religion: “A party (SIC) of me wishes that over the next few election cycles, every Democrat seat is won by blacks (male and female) and Muslims (male and female). That way, I won’t have to read the nauseating and unAmerican media reports of the ‘first ever’ _________ anymore.”

8) Fake White Supremacy: “Raise your hand…if you can tell me what these fictitious white supremacists believe in and where I can find their writings?”

These quotes are the tip of the ugly iceberg. Elliot Resnick’s backward and hateful views are a total disgrace and his Twitter Troll behavior is a stunning betrayal of Jewish and American values. He is uniquely unfit and unqualified to edit The Jewish Press and must be terminated immediately. And before Resnick whines “censorship”, his odious views are more than everyday opinions — they are deliberately spewed, mean-spirited attacks on entire communities intended to divide, offend and dehumanize.

Until Resnick is fired, key advertisers such as El Al, The Orthodox Union and Yeshiva University should immediately pull their advertising — unless they agree with Resnick’s toxic views. The UJA Federation must also stop providing mass free subscriptions in their lobby. To stay silent and not act in the face of such blatant racial and anti-LGBT incitement is to consent.

Please demand that these advertisers do what is right and just — or let them know that you will consider Resnick’s opinions their own.