WASHINGTON – Truth Wins Out praised The Human Rights Campaign today for suspending Google from its CorporateEquality Index for refusing to delete a dangerous “pray away the gay” app by Living Hope Ministries that targets LGBTQ youth. Truth Wins Out started a Change.org petition against Google in January that has 142,000 signatures and counting. Nearly a dozen lawmakers from across the nation have also come forward to condemn Google.

When Truth Wins Out brought the contents of the app to the attention of Apple, Microsoft and Amazon, the companies pulled it from their online stores. Google, however, has dug in its heels and won’t budge. Hopefully, being suspended from the Human Rights Campaign’s Corporate Equality Index will finally get through to Google’s leadership that they are doing irreparable harm to the company’s reputation.

“Google needs to stop digging a hole with the LGBTQ community before it’s too late,” said Truth Wins Out’s Executive Director Wayne Besen. “The company, whose motto was once ‘Don’t be Evil’, has recklessly chosen to let its reputation die on the hill of an evil ‘ex-gay’ app. For all the smart people who work at Google, it’s amazing that no one at this company has thought this through.”

Besen continues: “All this unnecessary drama to what ends? So, Google can cozy up to right wing extremists by protecting the lofty principle of allowing LGBT children to be psychologically tortured by abusive quacks? This is one of the worst public relations debacles I’ve seen in 30 years. Google should be ashamed of itself and immediately reverse course.”

In fact, Google has recently started intense PR outreach to extreme right wing organizations. The goal for embracing this 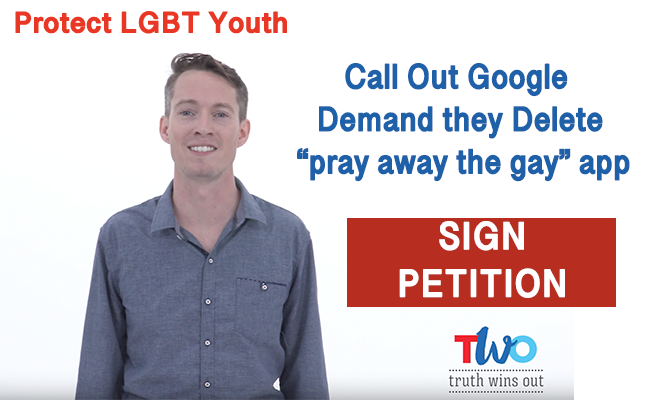 strategy, according to The Wall Street Journal, is “to defend against the allegation that they are biased against conservatives, a complaint lodged repeatedly last year by President Donald Trump and Republican lawmakers.”

Just this week, Google named Kay Cole James to its new Advanced Technology External Advisory Council (ATEAC), to give advice on the ethics of Artificial Intelligence. James was formerly a vice president of the rabidly anti-LGBTQ Family Research Council and is now the President of the far right wing Heritage Foundation.

“It is outrageous that Google appears to have slid into the realm of false equivalency where ‘both sides’ are morally equal and where diversity now means allegedly supporting LGBTQ equality, as well as those who fervently oppose it,” said TWO’s Besen.