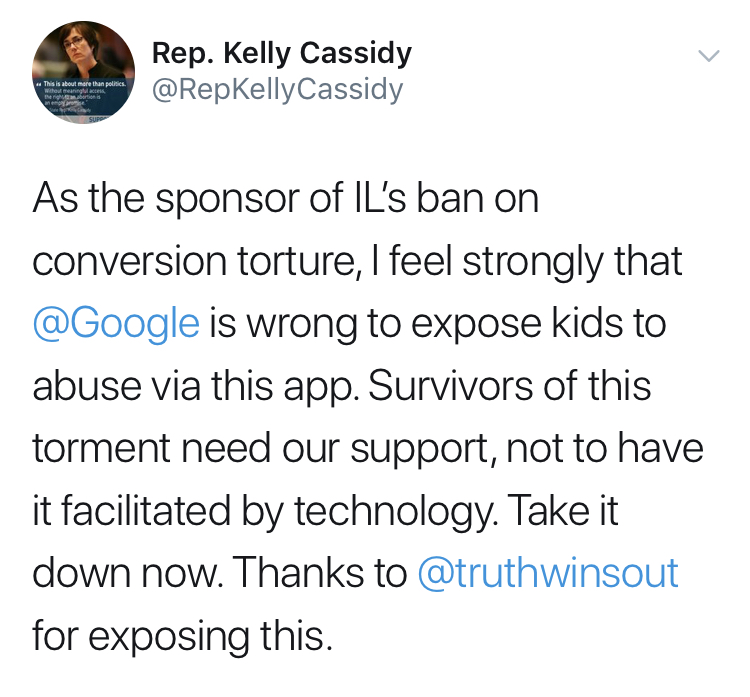 WASHINGTON – Truth Wins Out applauded Illinois State Rep. Kelly Cassidy today for her statement, released on Twitter, urging Google to delete an “ex-gay” conversion therapy app at its Google Play store. The app, by Living Host Ministries, targets 6th graders with homophobic messages, such as saying LGBTQ people have “destructive lifestyles” and can “pray away the gay.” The company’s intransigence has generated confusion and outrage, considering that Google has fancied itself an open-minded corporation with a commitment to diversity and respect. Apple, Amazon and Microsoft dumped the app after Truth Wins Out pointed out its contents

“As a sponsor of IL’s ban on conversion torture, I feel strongly that Google is wrong to expose kids to abuse via this app. Survivors of this torment need our support, not to have it facilitated by technology. Take it down now. Thanks to Truth Wins Out for exposing this.”

Rep. Cassidy joins a growing list of lawmakers from across the country that have condemned Google for hosting an app that fosters hate and discrimination. New York State Sen. Brad Hoylman, Pennsylvania Rep. Brian Sims and Milford, Pennsylvania Mayor Sean Strub have also spoken out.

take down the hate app,” said Truth Wins Out Executive Director Wayne Besen. “A statement or Tweet from your office supporting our efforts would dramatically increase pressure on Google to act with corporate integrity in line with their stated values of inclusion, respect and diversity.”

Truth Wins Out’s campaign has received high-profile media coverage and our Change.org petition has gathered 139,000 signatures and counting. Former “ex-gay” leaders have also demanded that Google dump the app, with op-eds in The Advocate, The Orlando Sentinel and the San Jose Mercury News. Yesterday,