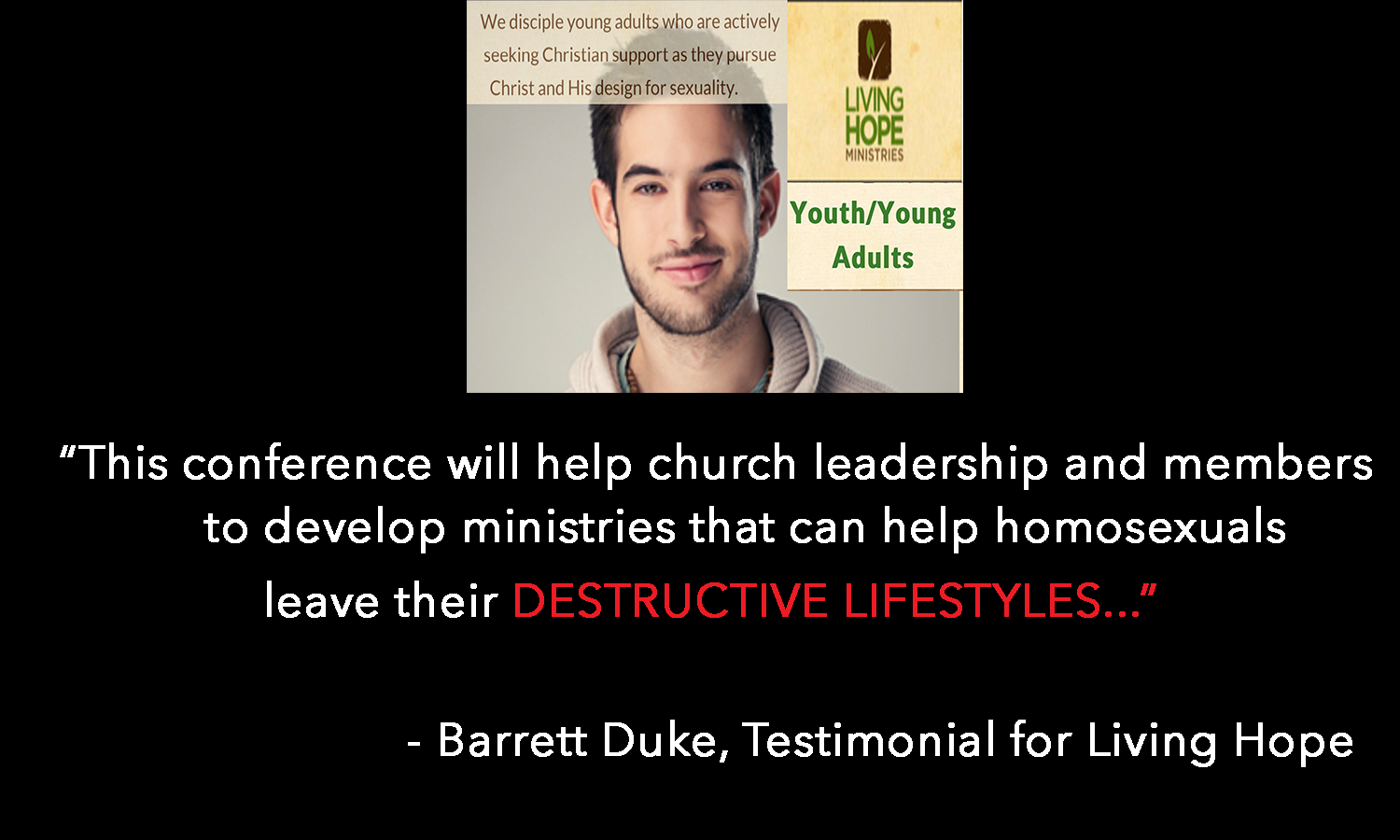 WASHINGTON – Truth Wins Out slammed Living Hope Ministries today for deceptively telling the media that it was not disseminating hate against LGBT people, despite a website bursting with dehumanizing anti-LGBT propaganda. TWO produced a short video highlighting a few of the many homophobic attacks on their website, which is an offensive smorgasbord of ugly and demeaning anti-LGBT smears.

Living Hope’s Executive Director, Ricky Chelette, misleadingly told the media: “I think it’s unfortunate that the advocacy group [Truth Wins Out] doesn’t know what we do and is assuming that we’re some hate organization. We are not. We love gay-identified individuals.”

“Living Hope ministries is pretending to ‘love’ LGBT people while actively spreading the most vile lies,” said Truth Wins Out Executive Director Wayne Besen. “They consider homosexuality the product of the devil and that we live ‘destructive lifestyles’ where we are trapped in bondage. In what bizarre alternative universe is such obvious contempt considered love?”

TWO’s video begins with a mother saying, “The enemy of our soul was already working on convincing my husband and I of the lie that our son was gay and born that way, and that it was our entire fault.”

A recent study by the Family Acceptance Project shows that “Parent-initiated attempts to change participant’s sexual orientation during adolescence were associated with more negative mental health problems for young adults.”

The video then cuts to someone who identifies as the director of Living Hope’s men’s ministry. The man discusses how God helped him stop being gay and find a wife, in spite of his HIV infection. He marvels at his offspring and proclaims, “God blessed us with three incredible children, whom the devil intended none of them would be here.”

The next clip specifically implicates Google’s culpability in harming people by using its platform to peddle Living Hope’s app. A man name Nick lauds Google and says, “I went to Google, our good friend Google, and searched help for same-sex attraction and Christians. The first thing that popped up was Living Hope Ministries.”

Truth Wins Out finished its video by quoting a pastor who endorsed a Living Hope Ministries’ conference on its webpage. While lauding the group, Barrett Duke of the Southern Baptist Convention says: “This conference will help church leadership and members to develop ministries that can help homosexuals leave their destructive lifestyles and find real, lasting peace through Christ.”

“What we discovered in just a couple hours of researching Living Hope’s content was the tip of the ugly iceberg,” said Besen. “This heinous ministry of hate should come clean and stop pretending they love people they clearly dehumanize and disdain.”

Last week, Truth Wins Out successfully launched a petition asking Apple to remove the Living Hope Ministries app. Apple swiftly took it down, displaying corporate leadership and responsibility. The app appears to also have disappeared from Microsoft. However, kids can still download the hate app on Amazon and Google, and this must change before LGBT youth are harmed. The American Psychiatric Association says that attempts to change sexual orientation can lead to “anxiety, depression, and self-destructive behavior” including suicide. In 2011, Truth Wins Out launched a Change.org petition that gathered almost 150,000 signatures to successfully remove the Exodus “ex-gay” app from the Apple Store.

For more information on the controversy read stories on: