App Targets LGBT Youth and Portrays them as Sick, Sinful, and Broken 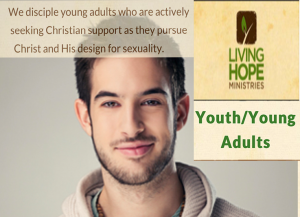 from its online store. The app, by Arlington, Texas-based Living Hope Ministries, specifically targets LGBT youth with toxic messages that portrays homosexuality as an addiction and says that LGBT people are sick, sinful, and broken. The app claims it can help them to essentially pray away the gay.

“It’s difficult to believe that Apple would allow its online store to be used as a platform to promote such dangerous, homophobic garbage,” said Truth Wins Out Executive Director Wayne Besen. “Ex-gay programs don’t work, they destroy lives, and they are condemned by every respectable medical and mental health organization in the world. “Apple should simply repeat what they did when confronted with an identical situation in 2011 – and that is remove the app from its store.”

In 2011, Truth Wins Out launched a Change.org petition that gathered almost 150,000 signatures to successfully remove the Exodus “ex-gay” app from the Apple Store. Let’s demand that Apple does the right thing again, so hateful bigots and bullies won’t torment LGBT youth.

Truth Wins Out Executive Director, Wayne Besen, tried to avoid launching a petition. He spent more than two hours on the telephone today with Apple staff, who gave him the runaround and failed to offer viable solutions.

“Perhaps Apple should have handed this off to the ‘Genius Bar’, because the people I dealt with today were not helpful and offered no viable path forward,” said Besen. “I was left no choice but to publicly move forward, which is a shame, because I reasonably asked to handle this matter discreetly.”

The American Psychiatric Association says that attempts to change sexual orientation can lead to “anxiety, depression, and self-destructive behavior” including suicide.

Please sign the Truth Wins Out petition now and forward it to your friends. 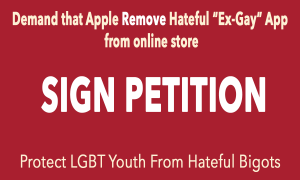