‘I was mortified to learn that you had distorted my work,’ NYU Professor Carol Gilligan Tells Focus on the Family Leader in Blistering Letter 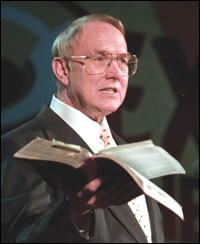 Miami Beach, FLA. – New York University educational psychologist Carol Gilligan, PhD, today slammed Focus on the Family leader, James C. Dobson, for “twisting” and “distorting” her research in a guest column he wrote in this week’s issue of Time Magazine. Dobson misrepresented her work in an effort to smear gay families while discussing Mary Cheney’s pregnancy. In a pointed letter to Dobson, Gilligan demanded that he apologize and “cease and desist” from quoting her work in the future.

“Dobson’s group is a fib factory that should change its name to Focus on the Fallacies,” said Truth Wins Out Executive Director Wayne Besen. “This organization habitually lies and shamelessly mangles research to support its anti-gay agenda. Time Magazine should immediately withdrawal Dobson’s column because it is so riddled with scientific errors that it is essentially fiction.”

In a letter to Dobson, obtained exclusively by Truth Wins Out after the group contacted Gilligan and informed her of the Time article, Gilligan expressed her dismay and demanded that the right wing leader apologize. According to the letter:

I am writing to ask that you cease and desist from quoting my research in the future. I was mortified to learn that you had distorted my work this week in a guest column you wrote in Time Magazine. Not only did you take my research out of context, you did so without my knowledge to support discriminatory goals that I do not agree with. What you wrote was not truthful and I ask that you refrain from ever quoting me again and that you apologize for twisting my work.

From what I understand, this is not the first time you have manipulated research in pursuit of your goals. This practice is not in the best interest of scientific inquiry, nor does bearing false witness serve your purpose of furthering morality and strengthening the family.

Finally, there is nothing in my research that would lead you to draw the stated conclusions you did in the Time article. My work in no way suggests same-gender families are harmful to children or can’t raise these children to be as healthy and well adjusted as those brought up in traditional households.

I trust that this will be the last time my work is cited by Focus on the Family.

“No reputable media outlet should continue using Focus on the Family as a resource because they are chronically dishonest and lack credibility,” said Besen. “James Dobson should start to wonder if there is something inherently wrong with his stance on gay issues if the only way he can support his positions is outright lying.”