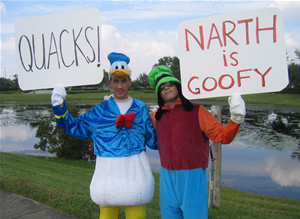 Miami Beach, Fla. — Truth Wins Out expressed satisfaction today in learning that Dr. Joseph Nicolosi, President of the National Association for Research and Therapy of Homosexuality (NARTH) has stepped down amid a cloud of controversy stemming from a polemic justifying slavery found on the group’ website. NARTH had also taken heat in recent months for advocating child abuse against gender variant children.

“NARTH was a sinking ship and they had no choice but to throw their captain overboard,” said Truth Wins Out’ Executive Director Wayne Besen. “The group was quickly becoming the Mel Gibson of the “ex-gay’ world and this move was NARTH’ desperate way of saying, “timeout, we are going to rehab.’ However, it may be too late, as no spin can erase their racist and anti-gay sin.”

Trouble began mounting for Nicolosi after Canadian doctor Joseph Berger, who serves on NARTH’ “Scientific Advisory Board” wrote on the organization’ website that gender variant children should be sent to school in opposite-sex clothing so they can be “ridiculed” into conforming.

But criticism of NARTH reached a crescendo after “Scientific Advisory Board” member, Dr. Gerald Schoenewolf, penned a polemic on the group’ website that seemed to justify slavery and said that African-Americans taken away in chains on slave ships “were in many ways better off than they had been in Africa.”

The National Black Justice Coalition quickly called on NARTH to apologize and The Southern Poverty Law Center also turned up the heat by writing an illuminating article on the brouhaha. As a result, some NARTH members and supporters defected to protect their professional reputations. Dr. Warren Throckmorton canceled his appearance at NARTH’ annual conference in November and former committee member David Blakeslee resigned.

Meanwhile, NARTH tried to dodge the controversy by remaining silent. When the organization finally addressed the situation, it blamed gay activists by calling the self-inflicted mess “political correctness gone amok.”

When this strategy didn’t fly, NARTH attempted a strained apology that only made matters worse as they seemed to shift the blame for the incident to readers by saying, the comments made by Dr. Gerald Schoenewolf about slavery “have been misconstrued by some of our readers.”

“How can one misconstrue a diatribe that justifies slavery?” Asked TWO’ Besen. “Dr. Nicolosi showed a stunning incompetence in the realm of public relations and for this he paid dearly. He kept digging a hole and failed to see that this mushrooming catastrophe would soon reach the national stage.”

Indeed, the crisis exploded on October 15 after the Los Angeles Times published an article under the headline: “Ex-Gay Group Draws Fire From Allies.” The sub headline screamed: “Backers raise concerns about online postings. One advocated ridicule of nonconforming children; the other seemed to justify slavery.”

“NARTH had always operated on the fringes of the mental health community,” said Besen, “but now the fa?ßade of respectability had completely crumbled and the entire nation saw NARTH as a radical group with peculiar theories on race and homosexuality.”

On November 11, NARTH’ annual meeting was held at the Renaissance hotel in Orlando. Truth Wins Out organized a protest against NARTH where participants wore duck suits and chanted “Quack, Quack, Quacks, Stop The Attacks” and “Slavery Is Never Justified.”

“It remains unclear what occurred inside the hotel because NARTH has refused to discuss the details,” said Besen. “However, when the participants emerged, Nicolosi had passed the torch and was no longer President. This is a significant development that no one would have predicted six months ago.”

Dr. A. Dean Byrd, who is affiliated with the LDS church, was named president-elect. From Byrd’ comments at the Orlando conference, there is no indication the organization is altering its extreme ideological approach to science.

“It’s time for NARTH members to emerge from their places of safety in the academy and in the public sphere and proclaim the truth about homosexuality – homosexuality is neither innate nor is it immutable,” proclaimed Byrd.

Nicolosi co-founded NARTH in 1992 and has served as the organization’ leader since its inception. From the beginning, the group combined a combatively homophobic agenda with bizarre pseudoscientific theories. For example, Dr. Nicolosi has said factors in the causation of homosexuality include “fear of tall bridges” a “phobia of the phone” and once claimed that gay men are more likely to be “pee shy.”

He has encouraged his clients to become more masculine by drinking Gatorade and calling friends “dude.” The doctor also applauded a patient in one of his books as making progress toward heterosexuality after he didn’t give a man his phone number at a bathhouse after they already had sex. Even more ludicrous is Nicolosi’ notion that, “non-homosexual men who experience defeat and failure may also experience homosexual fantasies or dreams.”

NARTH does not keep track of its failure rate. When asked by a Newsweek reporter why he kept no statistics, Nicolosi claimed, “I don’t have time.” More troubling is that Nicolosi does have the time to analyze children as young as three, telling the Advocate magazine that, “It’ my job to increase the possibility of a heterosexual future for these effeminate boys.”

NARTH member Dr. Jeffrey Satinover once reported that Prozac might be a cure for homosexuality. Another major NARTH contributor is Holocaust revisionist Scott Lively, co-author of The Pink Swastika, a book that partially blamed gay people for the Holocaust. “The Pink Swastika will show that there was far more brutality, torture, and murder committed against innocent people by Nazi deviants and homosexuals than there ever was against homosexuals,” wrote co-author Kevin E. Abrams in the preface describing the book.

The organization’ methods are so eccentric and bizarre that the American Psychological Association specifically condemned NARTH by name at the APA’ annual convention in August.

“For over three decades the consensus of the mental health community has been that homosexuality is not an illness and therefore not in need of a cure. The APA’ concern about the position’ espoused by the National Association of Research and Therapy of Homosexuality and so-called conversion therapy is that they are not supported by the science. There is simply no sufficiently scientifically sound evidence that sexual orientation can be changed. Our further concern is that the positions espoused by NARTH and Focus on the Family create an environment in which prejudice and discrimination can flourish.”

While Nicolosi will no longer be the front man for NARTH, sources tell Truth Wins Out that he will continue to play an active behind-the-scenes role with the group after he steps down in 2007.

Truth Wins Out is a non-profit think tank and educational organization that counters right wing disinformation campaigns, debunks the ex-gay myth, and provides accurate information about the lives of GLBT people. Besen, the group’ founder and Executive Director, is the author of “Anything But Straight: Unmasking The Scandals and Lies Behind the Ex-Gay Myth.”