The Perpetrators of Coup Against Democracy Must be Punished

Donald Trump’s unconscionable telephone call that threatened Georgia election officials with criminal offenses, if they didn’t “find” 11,780 votes, must not go unpunished. Nor should the seditious Senators and the “House Coup Caucus” get away with their act of war against democracy. Additionally, white supremacists and right wing militia thugs, who have announced on social media that they intend to commit felonies and sow chaos, must be preemptively arrested for inciting violence.

Trump’s latest unpatriotic attack on our country is an unconstitutional Tweet sent today, pressuring Mike Pence into disenfranchising voters: “The Vice President has the power to reject fraudulently chosen electors.”

It’s imperative that we don’t treat the current perfidy as “politics as usual”. Democrats aren’t sparring with a loyal opposition who has differing philosophies on the size and scope of government. What they are dealing with are collaborators who are using the machinery of democracy to destroy democracy. These serpents are attempting to disenfranchise millions of voters because they don’t like their ballot choices. They are working to install an authoritarian leader, because they have concluded that democracy no longer works for them.

Like all bullies, they only understand force and consequences, so that must be the remedy for restoring America. To begin with, Donald Trump should be impeached, and hopefully convicted, regardless of whether it’s politically convenient for Democrats. A conviction would prohibit Trump from running again for President in 2024. Even a failed conviction would put this charlatan through the ringer and force right wing Republicans to go on record supporting his crime syndicate. Republican Senators, other than Mitt Romney, flubbed Trump’s last “perfect call” with Ukraine, so let’s give them an opportunity to weigh in on the illegal Georgia call. If they are derelict in duty again, at least we will unquestionably know the enemies of democracy.

In The New York Times, the authors of “Impeach: The Case Against Donald Trump”, Neal Katyal and Sam Koppelman, make a cogent argument for impeachment. They essentially agree with me that no person is above the law and that lawlessness begets more lawlessness. Unless punitive actions are taken now, Trump, or some future wannabe dictator, will eventually succeed in hijacking the American experiment. Under no circumstances must we allow that to occur.

Additional actions are also necessary to thwart Trump’s deplorable coup attempt. The President should be relentlessly pursued and prosecuted at the state and federal level. This week, Reps. Kathleen Rice (D-NY) and Ted Lieu (D-CA) have urged Christopher Wray, the F.B.I. director, to initiate a criminal inquiry for the Georgia coup call. The Fulton County (Atlanta) District Attorney, Fani Willis, is considering a criminal probe.

“Anyone who commits a felony violation of Georgia law in my jurisdiction will be held accountable,” Willis said, when asked about Trump’s actions.

Unfortunately, some Democrats are returning to the tired playbook of embracing weakness over strength. Chairman of the House Democratic Caucus, Hakeem Jeffries, has so far opposed impeaching Trump, arguing, “We’re not looking backwards, we’re looking forward.”

Sadly, there is no “forward”, nor is there a viable future, as long as one of our country’s two major parties is at war with democracy and supports autocracy. It should also be pointed out, that those who are trying to steal the election are extreme anti-LGBTQ fundamentalists who, if they ever took over the country, would eviscerate LGBTQ rights and send us back to the Dark Ages.

Every Democrat in the House and Senate ought to get behind virtually every reasonable measure to strike back at the turncoats. This requires a new playbook with an emphasis on political hardball, that beats these deplorable traitors at their own despicable game.

Of course, we can’t sink to their level. We should always seek compromise in the name of good government, and President-elect Joe Biden has bent over backwards to impart this positive message. I agree with his efforts, because he is trying to create the America we need to succeed. And, I’m certainly not suggesting that we engage in Moscow Mitch McConnell-style obstructionism and political nihilism for the cynical purpose of partisan power.

However, it’s naïve and nationally suicidal to think that we can simply ignore sedition, and extend our hand, with a sheepish grin, to fascist quislings who believe it is within their authority to overturn a national election based on provably false allegations of voter fraud.  These insurgents can’t be worked with and should be treated with the contempt they have earned. They should bear the Scarlet “T” (Treason), for the remainder of their shameful, ignominious careers.

Meanwhile, right wing agitators and anti-democracy thugs who plan to descend on Washington,

DC on January 6 (and beyond) must be “handled” by authorities. The Proud Boys and other detestable Brown Shirt-types have made it clear that their intention is not peaceful protest. Encouraged by President Trump, they plan to intimidate and physically assault political opponents.

These insurgents and would-be terrorists have telegraphed online how they plan to create chaos and mete out brutality on the DC streets. According to The Washington Post:

Neo-Nazis took to Telegram, an encrypted chat app that allows users to broadcast to a channel of subscribers, to encourage followers to attend, saying they need “boots on the ground” to intimidate lawmakers and push for a nationalist agenda. Members of the Proud Boys, an all-male far-right extremist group with ties to white nationalism, boasted about their plans to break off into smaller groups to roam the streets looking for counter protesters to confront.

Given the verifiable threat, what we need is “preventative policing”, instead of waiting for punches thrown, knives wielded, and guns fired by right wing extremists. I’ve personally witnessed, on several occasions, hyper-aggressive police tactics during peaceful Black Lives Matter protests and other progressive demonstrations. So, why the kid gloves for white supremacists and neo-Nazi’s who have publicly avowed to inflict harm on innocent people? If certain police officers are sympathetic to the cause of sedition, or the race-based Civil War promoted by hate groups, they are uniquely unfit for service and should immediately be relieved of duty. 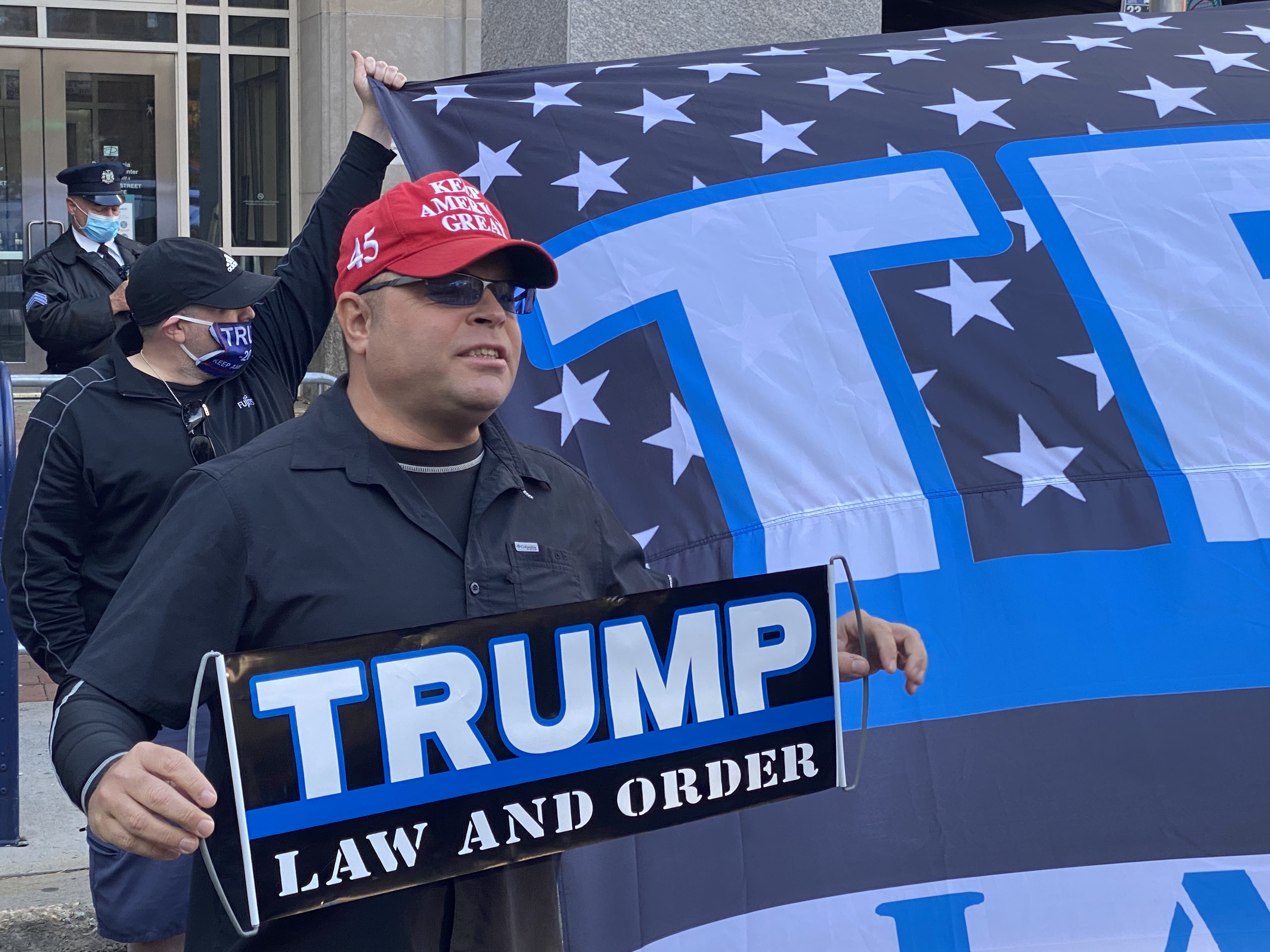 experience in a democracy. They are calls for overthrowing the government, with supporters fanning out to pick fights and impose their political will through force. I was nearly assaulted by a dozen Proud Boys in Philadelphia for exercising my constitutional rights by wearing a “Count Every Vote” sweatshirt.

The answer to curtailing these pugilists disguised as protesters is simple. The police must line the DC streets with large paddy wagons and arrest, on the spot, any person making direct threats against fellow citizens. Pounding peoples’ faces is not legitimate protest and inciting violence isn’t free speech. These thugs have already told us online what they are plotting, so it’s no mystery. The authorities need to take these threats seriously and disrupt their plans before they come to fruition.

The DC police took a step in the right direction on Monday, arresting Proud Boys leader Enrique Tarrio, charging him with burning a Black Lives Matter banner from a historic Church the last time he “protested” in Washington. When Tarrio was apprehended, he was also was charged with two felony counts of “possession of high-capacity ammunition feeding devices.”

Whether it’s politics or confronting anti-democracy hooligans on the street, the time for appeasement is over. Our Republic is under direct threat from authoritarian forces, who don’t believe in the rule of law or the right to vote, and we would be wise to act accordingly. Such tyranny should be given no quarter and we must play our part in preserving our democracy.