WASHINGTON — Norman Goldwasser, by day, is an Orthodox Jewish therapist at Horizon Psychological Services who compares homosexuality to Obsessive Compulsive Disorder and misleads clients by claiming that their sexual orientation can be changed with his special brand of quack therapy, which is rejected by every respected medical and mental health association. By night, an undercover investigation by Truth Wins Out has found, he solicits sexual partners on Manhunt, a gay dating App, using the profile “Hotnhairy72.” During our operation, Goldwasser, going by the pseudonym “Dave”, offered to meet for sex with our operative, “Brandon,” at a Fort Lauderdale motel room. Goldwasser also had a profile on Bear Nation by the same name.

This latest scandal comes as the new movie Boy Erased (Starring Lucas Hedges, Nicole Kidman, and Russell Crowe) has brought a renewed spotlight to the issue of the harm caused by “ex-gay” programs.

“Norman Goldwasser’s double life of unconscionable lies highlights the rank hypocrisy and predatory nature of the fraudulent ‘ex-gay’ industry,” said Truth Wins Out Executive Director Wayne Besen. “We urge every state to ban the scourge of conversion therapy that attacks the mental health of LGBT youth and puts them in harms way.” Besen is the author of Anything Bust Straight: Unmasking the Scandals and Lies Behind the Ex-Gay Myth.

According to the National Center for Lesbian Rights (NCLR) Born Perfect Campaign, 14 states and the District of 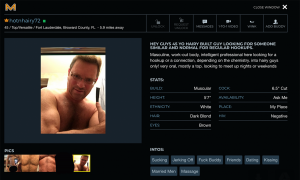 Colombia have laws that prohibit conversion therapy for minors. Unfortunately, there is a loophole for religious groups to abuse minors with their companion “pray away the gay” programs.

Truth Wins Out does not engage in the outing of people participating in ex-gay programs unless there is overwhelming hypocrisy, exchange of commerce, and the threat of harm to LGBT youth. The Goldwasser outing passes all three tests.

“Goldwasser can’t claim his personal life is none of our business when trying to ‘cure’ LGBT people is his business,” said Besen. “Here is a case where a charlatan is committing consumer fraud by misleading clients and adversely affecting their mental health. We are particularly concerned when Goldwassser’s scam preys on young people susceptible to his charade.”

Linked to the disgraced and now defunct Jewish “ex-gay” organization, Jews Offering New Alternatives to Homosexuality (JONAH), Goldwasser is controversial, once having a speaking appearance cancelled in Australia after people learned of his intolerant views. He is a signatory of the deeply homophobic “Declaration of the Torah Approach to Homosexuality,” which proclaims that recent acceptance of LGBT people is due to public relations efforts. According to the Declaration: “A propaganda blitz has been sweeping the world using political tactics to persuade the public about the legitimacy of homosexuality.”

A star of the conversion therapy movement, Goldwasser co-wrote a paper in 2006 with notorious conversion therapy proponent David Matheson, “Holistic Therapy: A Comprehensive, Clinical Approach to the Treatment of SSA.” The term SSA is used as shorthand in conversion therapy circles for “Same Sex Attraction.” The paper is gratuitously anti-gay and extremely offensive, habitually confusing crass stereotypes with actual science. In one section, homosexuality, which is not a mental health disorder or disease, is casually pathologized and compared to Obsessive Compulsive Disorder:

“Individuality/Uniqueness – Each person has his/her own unique individuality – there are no two person who are exactly alike. Two people with SSA can be completely different in every other aspect of their lives and psychological makeup and cannot be grouped solely based on their common challenge. Similarly, OCD can manifest itself in countless different variations, subtypes, and combinations. Describing a group of individuals only in terms of OCD compromises and distorts the comprehensive and accurate clinical picture of each individual.”

Goldwasser has also funneled clients into the predatory and ineffective Journey into Manhood (JIM) program, where 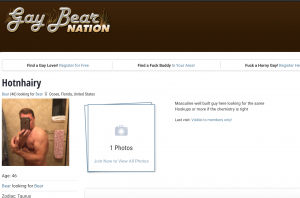 gay men are taken into the woods to participate in what are considered “manly” activities to change their sexual orientation from gay to heterosexual. They are also falsely diagnosed as having become gay because of poor parental relationships or not participating in sports. The program is controversial, because some who have attended JIM say the program includes bizarre and inappropriate cuddling sessions. The fact that Goldwasser was caught on Manhunt, highlights why Truth Wins Out has frequently referred to the JIM program as “Journey into Manhunt.”