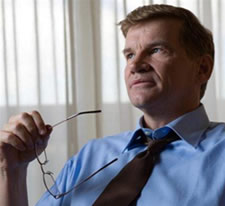 NEW YORK — Evangelical leader Ted Haggard, in apologizing for contacts with a gay prostitute, said he had sought help to combat a “repulsive and dark” side of his life _ but no approach had proven effective.

Even as he pledges to undergo further counseling, Haggard’s comments have rekindled debate over the controversial premise that people can overcome same-sex attractions through “reparative therapy.” It’s a concept espoused by many religious conservatives, and disputed by many mental health experts.

“Haggard is Exhibit A of how people can’t change their sexual orientation,” said Wayne Besen, a gay-rights activist and author. “With all that he had to lose _ a wife, children, a huge church _ he had to be who he was in the end. He couldn’t pray away the gay.”

Haggard denied some of the prostitute’s claims but confessed to “sexual immorality” and resigned earlier this month as pastor of his 14,000-member New Life Church in Colorado. He gave up the presidency of the National Association of Evangelicals.

“There’s a part of my life that is so repulsive and dark that I have been warring against it for all of my adult life,” he wrote to his congregation. “Through the years, I’ve sought assistance in a variety of ways, with none of them proving to be effective in me.”

Haggard did not specify how he had sought help or describe the healing-and-restoration program he vows to pursue now _ but did say he deserved to be “disciplined and corrected.”

“There’s a profound sadness that someone should be saddled culturally with such a negative attitude toward a part of themselves,” Anderson said. “From our vantage point as psychologists, his self-repulsion is not necessary, it’s not justified.”

“If this man is saying, ‘This is a part of me that I abhor,’ why can’t we respect that?” Nicolosi asked. “Why do we have to attribute that to something external and take away the dignity of the individual to express how he feels?”

Nicolosi is president of the National Association for Research and Therapy of Homosexuality (NARTH), representing therapists who believe it’s appropriate to help clients try to change their sexual orientation. Some take a secular, psychoanalytical approach; other allies of NARTH favor prayer-based counseling.

Nicolosi suggested that he could help Haggard if the evangelist was prepared for “deep, emotional work.”

“We’re talking about looking at your life squarely in the eye _ facing the realities that you did not get certain central affirmations from your mother or your father,” Nicolosi said.

“There’s nothing good that can come from conversion therapy,” said Doug Haldeman, a Seattle psychologist who specializes in gay-related issues. “The wreckage left behind, for some who go through it, is frightening _ they’re depressed, suicidal.”

Dr. Jack Drescher, a New York City psychiatrist who wrote “Psychoanalytic Therapy and the Gay Man,” said reparative therapy’s proponents ignore its potential for causing harm. “They’re selling you something without any warning of what might go wrong,” he said.

There have been numerous studies, with varying conclusions, on how homosexuality originates and whether it can be changed. But there has been no authoritative study _ accepted by both sides _ examining the effectiveness and possible ill-effects of reparative therapy.

At its national convention this summer, the American Psychological Association was pressed by NARTH about its stance on reparative therapy. APA leaders said they did not oppose people voluntarily seeking to change their sexual orientation, but said therapists should warn that treatment could prove harmful and be sure the client wasn’t motivated mainly by social pressure.

The APA also said the positions of NARTH and its allies “create an environment in which prejudice and discrimination can flourish.”

Nicolosi said NARTH opposes anti-gay prejudice, but he contended that social factors which trouble gays are a legitimate reason for seeking therapy. “It’s more difficult to live as a gay man than as a heterosexual,” he said. “We wish to respond to those clients who feel that it is. … It’s irrelevant if it’s society’s fault.”

Nicolosi is a regular participant in Love Won Out, a series of conferences organized by the Christian ministry Focus on the Family as part of what is known as the ex-gay movement. The conferences, often protested by gay-rights supporters, spread the message that “a homosexual identity is something that can be overcome.”

Another Love Won Out regular is Alan Chambers, president of Exodus International, a network of ministries promoting “freedom from homosexuality” through Christian faith.

Chambers, who says he changed his own sexual orientation through religious counseling, expressed empathy with Haggard, saying, “We’re all susceptible to temptation.”

As for Haggard’s future, Chambers said: “If someone says they want to change because of their faith-based convictions, you have to honor that. There has to be a real desire and motivation on the part of the person to change.”