Freedom To Not Be Angry All The Time

I do political cartoons for my local gay paper, Baltimore OUTLoud. Being published regularly allowed me to gain membership in The Associate Of American Editorial Cartoonists…a dream come true. Cartooning was the first love and political cartooning, what was called the Ungentlemanly Art, is a form of expression that I’ve been attracted to since I was a teenager, growing up in the Washington D.C. suburbs with Herblock and Gib Crockett in my daily newspapers. In high school my cartoons were in the student newspaper and on the walls of a few select social studies classrooms.

Jacob Bronowski once said that great art doesn’t set out to preach, but to shine a light in which the outlines of good and evil are “are seen in fearful sharpness of outline.” The best political cartoons are like that. It’s very easy, and most fall into that rut of being preachy. But the best ones shine that light.

I try to do that with my cartoons. When I see myself getting too preachy on the drawing board I start over. But I get angry too and sometimes I just let the anger out and my viewers can take it or leave it. Like this one I did after California Proposition 8 passed… 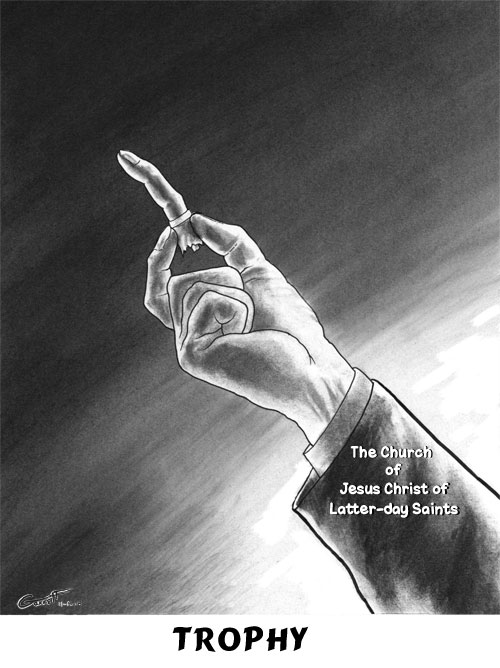 That’s all done on the paper by the way, only the lettering is done in the computer. I still draw my cartoons with “traditional media” and scan it in, not so much because I am a throwback as I just work intuitively with those tools better then with a digitizer pad.

That angry metaphor of the severed ring finger works for me artistically, and at some deep level it gets out of me something that just needs getting out. I hate saying this about myself because it sounds so pretentious but I am an artist. The way I know that about myself isn’t that I like to draw or that I like it very much when my drawings get looked at, it’s if you put me on a desert island with no tools to make imagery with I would cut me some sticks and twigs and draw in the sand because I just have to get it out of me from time to time whether it makes any sense to anyone or not and even if nobody else ever sees it but me. I have to do this from time to time or I will go nuts. It’s just something I am. And maybe I’m not really that good at it either. Lots of times I will look at my stuff and think I really stink at it. But I know I can’t stop doing it. Drawing…painting…photography….it’s all about the image. It’s a language I need to communicate in…much of the time just to think my world and my life through.

For my political cartoons, unlike a lot of cartoonists, I don’t do many rough sketches first. I do the drawing first in my head, and when I can see it clearly in there, then I sit down at the drafting table. Yesterday I had one ready to go, concerning the vote against same-sex marriage in North Carolina. I’d been drawing it in my mind the moment I laid eyes on the advertisement Billy Graham placed in a bunch of North Carolina newspapers. Where there any chance of that amendment not passing, Graham effectively killed it with those ads and I was angry. And immediately when I saw the ad the image for a cartoon about the likely outcome of the vote came immediately to my mind. I thought about it for days and it changed very little in my visualization of it. I was angry. The image was angry.

Yesterday morning I read the news and even though I had been completely expecting the outcome, it hit me hard. Every fucking time one of these votes happens it feels like a kick in the stomach. And you know that’s exactly the purpose of having these votes…to make gay people hurt. Because if we don’t bleed they aren’t righteous. And I did hurt. I walked around all morning long carrying this lump of grief like a stone in my gut. Reading the streams on Facebook and Twitter I could see others did too. But I did notice something that lifted my spirits even so. This time…This Time…that stone in the gut was being carried by a lot of heterosexuals too. This was what I knew would eventually win this thing: when enough of our heterosexual neighbors began to see this struggle as theirs too…feel it in their gut the same way we feel it in ours. Even as I grieved I could see we were winning this thing. But it felt so painful…so very very painful. But I had my outlet. I was going to go home from work that day, and right to my drafting table, and out would come the cartoon I had visualized so clearly in my mind’s eye for days. 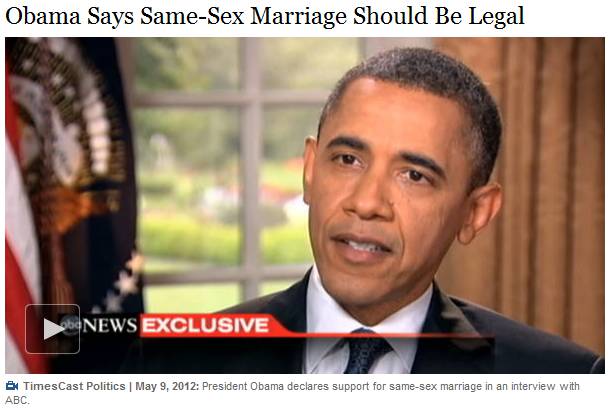 …and all of a sudden Billy Graham didn’t matter anymore. And something happened to me that made me realize how much anger I have been carrying with me all these years. I stopped being angry. It almost literally felt like a weight had been taken off me.

I don’t know if I’ll do that cartoon now. I might…it’s still something I think needs being said about him, about the people who put so much hard work into kicking their gay neighbors in the face. You can shine Bronowski’s fearful sharp light at evil, but you can also shine it at the good, and I am not so very angry anymore. Life is good. Hard sometimes, but good.

Time was the haters could make us hate ourselves as much as they hated us. Then that time was over, and they could no longer make us hate ourselves and that made them angry. It made them angry and so they had to make us angry too. And being angry all the time can be a stone around your neck too. Not as big a one as hating yourself, but big enough all the same to keep you from having a decent life. Perhaps anger, unlike self hate, is a necessary thing. Perhaps without that righteous anger we would not have worked so hard, and come so far, so fast. But the day is coming when we don’t have to be angry anymore.