I don’t cartoon as often as I’d like…my real job (the one that pays my mortgage) takes precedence over everything else. So I often find myself reading this or that news item and thinking about the Really Great cartoon it would make, like for instance that item I read here where Maggie Gallagher is bellyaching that she was dragged into the fight against same sex marriage kicking and screaming, and I have no time for it.  But I have a nice little gig at Baltimore OUTLoud that provides me with a bi-weekly deadline, and thereby incentive to make time for the drawing board at least once every two weeks. 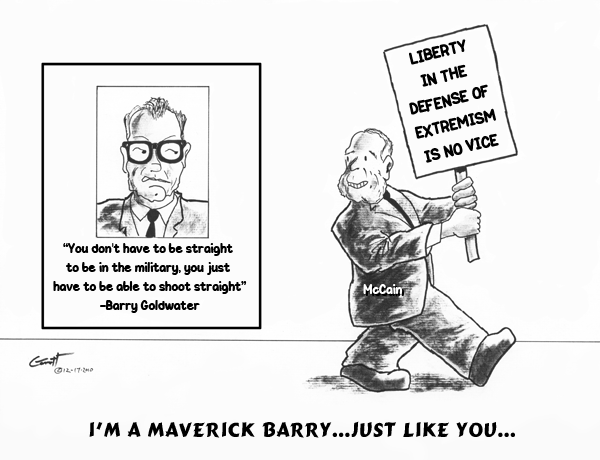 This one was done right before the vote to repeal Don’t Ask, Don’t Tell, when McCain was in the forefront of the fight to keep it in place.  McCain’s conceit is that he is an Arizona maverick in the mold of Goldwater.  Who actually believes that claptrap I could not possibly say.

As for the real Goldwater, they say his speaking out against the policy was a sign he’d mellowed in his old age. The reality is probably more likely he always had a brain to begin with and the older you get the more you learn and the more you learn the more you find yourself having to change your mind about things and the less likely you are to be a pompous ideological ass.  Opinionated yes, but just without the relentless dogmatism.   Goldwater let it be said, had principles he honestly held, and while some of them would simply have not produced the free, stable and productive U.S. libertarians claim they would have, at least he thought seriously about his beliefs.  A thinking person lets life teach them things.  The only way to stop learning those lessons, is to stop thinking.  Now take another look at the life of John McCain.

A man without principles, whose mind is just a collection of reflex opinions and prejudices never learns anything from life.  They become even more dogmatic and bitter the older they get.  McCain is no Goldwater now because he was no Goldwater when he was younger. 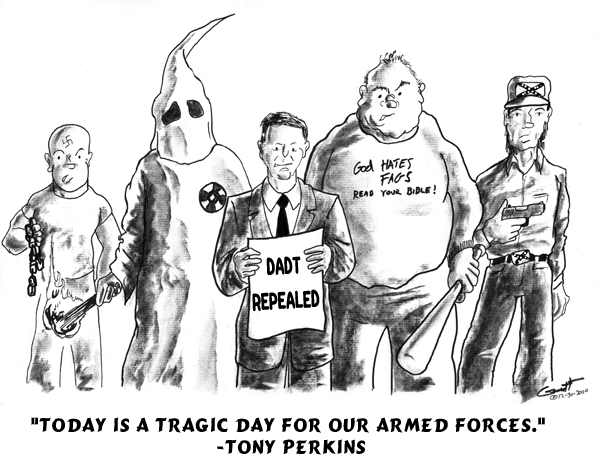 After Don’t Ask, Don’t Tell was repealed, Tony Perkins of the Southern Poverty Law Center identified hate group Family Research Council declared it “a tragic day for our armed forces.” Probably he was referring to the military but another armed force came to mind, especially as the torrent of bile from Perkins and the FRC ensued claiming that repeal would do everything from increase AIDS among soldiers to a charming note from Tony saying that “…the Senate has to ask itself: Do they want the blood of innocent soldiers on their hands just to appease the political base of Sen. Harry Reid (D-Nev.) and Nancy Pelosi (D-Calif.)? If they can live with that, then they’re unlike any human beings I’ve ever met.”

A tragic day for your armed forces indeed Tony.  Be honest…you know perfectly well why the same organization that tracks the likes of the Klan and American neo-Nazis has your outfit pegged as a hate group right along with those folks.  FRC is like the BASF of anti-gay violence…they didn’t make the ax handle that bashed in the head of the gay guy, they just made it swing harder…